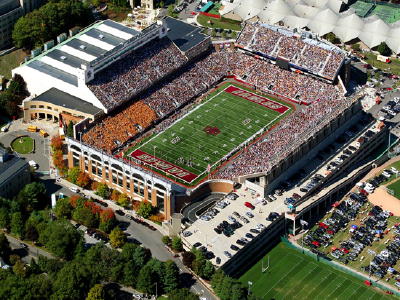 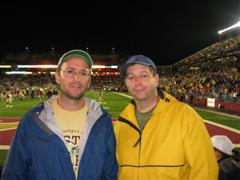 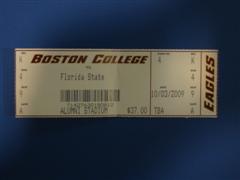 Introduction
This was a game with some tricky planning. It was going to be a one night road trip, but until game time was announced, we didn’t know which night. Given it is a four hour drive, noon or 7:30pm would make it easy, but alas the game was 3:30pm. We decided to drive up Friday morning and leave right after the game. The drive up on Friday was uneventful although it is strange that the Mass pike has a mile marker every 0.2 miles. Someone wasted a lot of money on that decision. 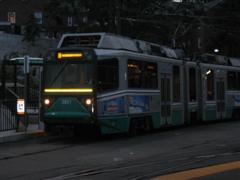 We actually had a host for this game as my wife’s cousin, BW, is a senior at BC. After checking in at the hotel, we took the T over to campus. Please be aware that if you have never been to Boston, the green line of the T is a bus on rails. Do not confuse it with a train. BW showed us around campus which has a lot of steps and a building that looks like a church but is not a church. Al declares that BC has a female to male ratio of 20-1 which he thinks was proven by counting over and over. This didn’t seem right but there seemed to be a lot more women than men on campus. Maybe all the men were passed out somewhere. We went over to where ESPN had set up for Gameday the following morning. This seems like a good place to ask “What the hell is Gameday doing at this game?” When I first heard Gameday was doing this game, I thought it was a mistake and someone at ESPN production lost a bet to a BC alum. But alas, they were doing a special show about a BC linebacker battling to return from cancer. That made more sense than the game.

BW showed us the greatest concept in student housing. It seems that BC has designated tailgating zones and no joke, tailgating has a start and end time. This is not big time football. Anyway, one of the housing areas is a designated tailgate zone. So they limit the housing to 21 and over and have a fence with checkpoints around the housing. Meaning that you must be 21 and over to live there and on game days you cannot get in unless you are 21 and over. This is brilliant! Plus it allows for excessive on campus drinking for those fortunate enough to live there. Additionally, I see tremendous opportunity for allowing certain members of the opposite sex (or 2 or 3 or 4, etc.) use of your bed the night before so that they are already in the tailgate zone the next day. Like I said, brilliant on all accounts. Needless to say, this is the most desirable housing on campus despite it being built as temporary housing back in the 50’s or 60’s and has never been updated.

Nightlife
At dinner, we had Japanese food at Fin’s. I have to say that at this point, that was the best meal of the quest. Al discovers that he now likes spicy tuna rolls. Let’s see what else Al discovers he likes along this quest. Let’s hope it is limited to food stuff.

Our host then took us to the old person bar. Despite being seen as BW’s father, it was a good atmosphere and Al even got carded. I guess the lack of hair was deceiving. Drinks flowed nicely and after all sports events closed down the 80’s music videos went onto the TV’s. Things went well until it sank in that as we were watching all the 80’s videos, BW as a senior at BC was born in 1988. Boy are we old. I had to explain to BW the significance of the video “Video Killed the Radio Star” as he did not know who the Buggles were or even that MTV played videos in the distant past. We did have fun playing which 80’s video was next. It was then time to leave the old person bar and Orla (our contemporary), and move onto the young person bar. Boy are we old. That’s about all we could take away from the young person’s bar except for the girl in the boots and green dress grabbing the others girl’s a**. Another Al observation, green dress equals lesbian (not that there is anything wrong with that). In what was Al’s most insightful observation (and what will probably be the case over the next 30 years), the 2:00am BC shuttle from the bars back to campus is like the 3:36am LIRR train. Agreed. Arriving back to campus, it was still in party mode. In fact, on campus food was still open. Bravo, BC, bravo. Unlike Texas, you can actually eat here after 10pm and in fact well into the night. Nice job, BC. 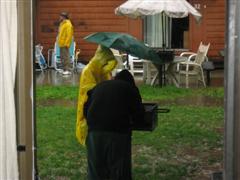 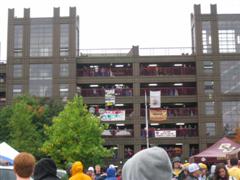 The next morning we awoke and headed to campus for ESPN Gameday. Although upon arrival at BW’s and the downpour that began, we opted for a couch. Here we learned that BW threw up for the first time from drinking. I am morally conflicted and Al was thrilled. As someone from an older generation I felt that I should be ashamed of myself, yet I could not help feeling proud. All those psych majors, please weigh in. Since, we were in the tailgate zone there was a steady stream of people in and out, although the rain put a damper on some BBQ and outdoor activity. You really should check the weather before BBQ’ing or put up a tent. The best tailgate idea is to convince your southern parent to come to your tailgate. This guarantees; you being dry as they put up tents, eating well, and mom and dad cleaning up. This is definitely the way to go. Here is a word to the wise, pizza delivery on game day takes 2 hours and you need to go pick it up. Also, when your roommate calls and says the police are at your room and you need to come back to discuss certain events, it can be quite the moral dilemma, but you should not go.

The Game
First, field level end zone seats do not allow you to see an awful lot. Second, if we are coming to your city, it will rain…a lot. It rained all morning. Fortunately, it stopped for most of the game except for a five minute span where it poured. Al has realized that contact lenses and a hat work well. I am glad it only took him 4 games in the rain. Anyway, I had quite the time watching BC go out to a 21-3 lead, as we sat what seemed like in the middle of the FSU section. Yes, I did have a Gator hat on (a hat that may have gotten on TV during an FSU celebration) and the FSU folk were none to happy about that. BC completely squandered the lead and allowed FSU to tie it up at 21-21. BC did get a TD with 4 minutes left to win 28-21. Also, we saw a BC fan get tossed out for heckling FSU fans. This just should not happen in your home stadium. 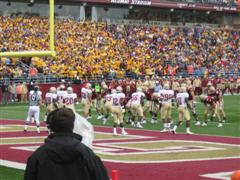 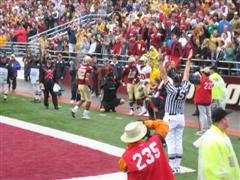 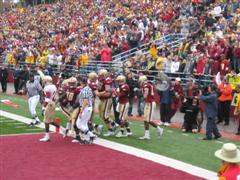 Aftermath
Upon arriving home, Al declares that a four hour or 250 mile trip is his limit for a car trip. We shall see.

Photo Gallery
For our Boston College photo album, Please click here. You can view as a collage or run as a slideshow. There are comments to explain what is in the photo but most are self explanatory. Thanks to Google, I can no longer embed the slide show with comments.