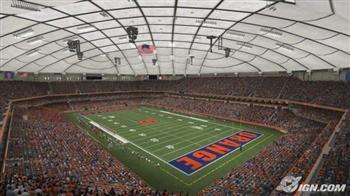 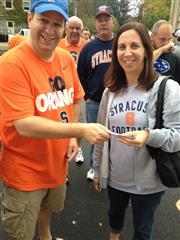 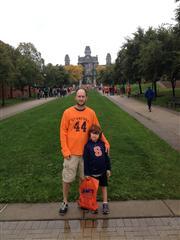 The first all out family trip of The Quest has arrived. This would definitely be an atypical trip. Friday, October 4, 2013 is a date that will live in Singer family history.

Travel
We loaded up the Family Truckster and headed out to Syracuse, NY, a five hour drive.  Due to the various travel schedules of The Quest families and guests, we were all making our own way to Syracuse.

The Singer family (Jarrett, Beth, Haley, & Jake) headed out in the evening on Friday due to sports and family schedules. When the family Syracuse trip was originally planned, we were leaving Friday morning and the kids were missing school.  Plans change.  We headed out about 6pm and made it a good solid mile before stropping for dinner.  In all honesty it was a planned stop.  We had dinner before heading out at a new Italian place that was not very good.

After being fed, the Singer family headed for Syracuse, for real this time.  In the ultimate compliment to my family…it was an uneventful drive. A bit of traffic on the Cross Bronx and GW Bridge, a fast pit stop somewhere for gas and a few drinks and that was all.  We pulled into the DoubleTree a little after midnight.  So far so good.

Hotel
Upon check in at the DoubleTree, it was cookies all around.  The kids don’t like nuts in their cookies so more for me.  Until we had to buy snacks to replace the cookies they would not eat because of the nuts.  After a little hyperactivity due to being in a hotel, it was off to bed.  As a note to all would be parents out there, you never need to go anywhere on vacation.  If my kids are in a hotel with a pool, the hotel could be right next to my house and they would not care.  What annoys me about this is, I have a pool, a pool they rarely want to go in anymore.

Breakfast
We awoke the next morning and met Scott and Tyler for breakfast.  Scott and Tyler were on board with the Syracuse trip the moment it was presented 8 months or so ago.  Tyler plays football and had been begging Scott to go to a game.  I mentioned we were doing a family Quest trip to Syracuse next year and they were all over it.  So welcome to The Quest, Benowitz’s. 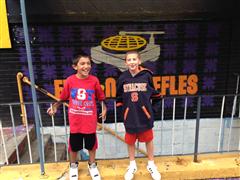 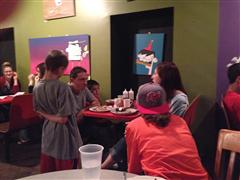 Breakfast was at a place called Funk ‘n Waffles.  Say that three times fast.  My son did and he very soon lost the charade of saying Funk ‘n Waffles and just went directly to…well you know.  I think he enjoyed breakfast most of all as he saw it as an excuse to curse, repeatedly.  As usual, as his parents, we could not stop it.

Breakfast was excellent. I had a waffle with egg, cheese and bacon and my wife went the sweet route with a brownie batter waffle with bananas.  She won, but both were superb. I will definately be craving that place.

Another Mall
After breakfast we headed off to the Destiny USA mall as I had some personal business to attend to.  And before you ask I should state that “Well, I believe that it’s personal and it’s none of your business, young lady.”  Beth was assisting in the navigation and had her very first memorable quote of The Quest…”There is something inherently wrong with me looking at a map”.   Truer words have never been spoken. With respect to my personal business, I need to state for my own benefit that Syracuse will be the place where my [redacted] dreams came to die. Maybe not, we will have to see.

Shopping
After the mall, it was a quick stop back at the hotel and then to campus.  We parked the car at a hospital garage and proceeded onto campus.  It was a nice realization that this was exactly where we had been for breakfast.  That would have been handy to know as we could have planned that better, but oh well. 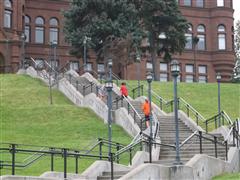 We saw two buildings on campus before heading to the bookstore.  Ten hours and many many dollars later, we left the bookstore and went to an area right off campus for more shopping.  More money and time later, we met up with Al and Nate who came up to Syracuse on Saturday morning.  This would be a very short trip for Al, coming up on Saturday and leaving before dawn on Sunday. His wife had him on a short leash given not 24 hours prior he finally moved into a new house as a result of Hurricane Sandy. His being away was eating into his wife’s ability to direct him what to put where. 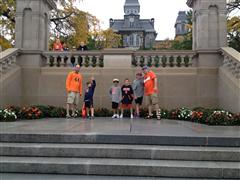 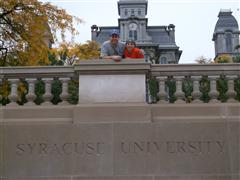 Of course Al and Nate had just eaten and we needed more food as all that shopping had burned off breakfast and we needed lunch.  Actually, it was more preventative to avoid being really hungry during the game. But whatever it was, lunch was at Acropolis.  All I can say about that was, good thing we do not rank worst meals.

Oh, did I mention it started to rain.  But you already knew that because it always rains on The Quest. 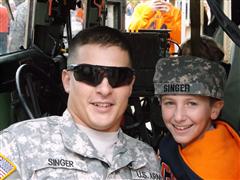 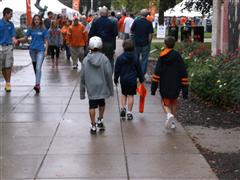 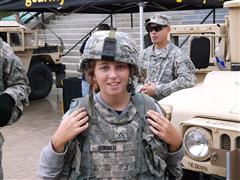 Time to head off to the Carrier Dome.  We walked through campus and finished up our very brief tour of the SU campus. We saw a few tailgates, a few nice areas of campus and then stumbled upon a military vehicle display. One of the soldiers was named Singer, which was quite the coincidence.  Needless to say, we had to get lots of pictures with the kids in his gear.  It was actually pretty cool. 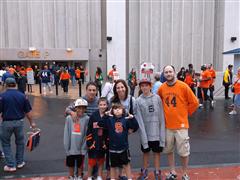 Into the Carrier Dome we went.  I have been here before for a Florida basketball game (NCAA tournament) and it is a nice venue.  The Dome has very good sight lines and we had great seats for the kids on the 50 yard line.  It should be noted that the Carrier Dome has free WiFi, which made for excellent cell and data coverage.  All other schools should take note, this was a great feature.

Game
The game kicked off and then it ended.  Yes, that fast.  Three plays in, Clemson goes for a 60 yard TD.  The Tigers would get two more first quarter TD’s and at the end of the 1Q it was 21-0.  Beth was a trooper and a good sport making it through an entire quarter of football.  Upon leaving to “wander campus” she uttered…”I didn’t think there was anything worse than football on tv.” And off she went. 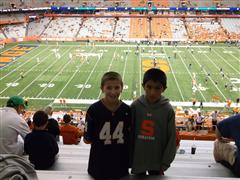 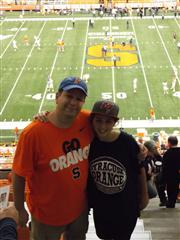 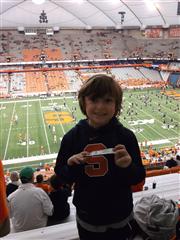 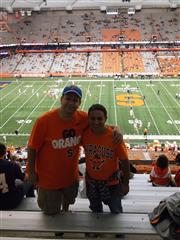 Syracuse would then score on the first play of the 2Q leading my son Jake to state “It’s Mommy! 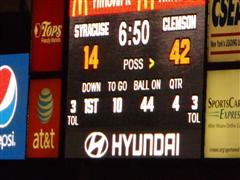 Syracuse does better with mommy gone”.  That was as close as this game was getting.  At halftime, we said goodbye to Al and Nate who went to walk around only to never return.  At the end of the 3Q, we said goodbye to Tyler and Scott who had to head home as Tyler had early sports on Sunday.  Only the Singer’s minus Beth remained. Clemson went on to a 49-14 victory in a game that could have been much, much worse. 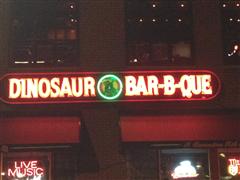 After the game, it was off to dinner. Pre trip research highlighted Dinosaur Bar-B-Que as the place to go.  Off to the parking garage to fight our way out. Actually it was not that bad as I was on the second floor headed out. Al was not so lucky. I guess the fact that everyone left hours ago made it a little easier, for me at least.

Dinosaur Bar-B-Que had a 90 minute wait and there was no way the kids were doing that. So we waited for takeout while Al headed back to the hotel to get the standard chicken fingers for the kids. 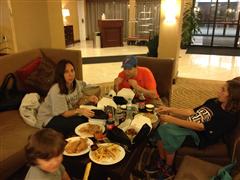 Back at the DoubleTree, we took over the hotel lounge area as they would not let us eat the BBQ in the restaurant despite the kids dinner coming from there.  But at least the manager was nice about it and set us up with plates, silverware, etc for us to eat in the lobby.

Dinosaur BBQ makes the best meal list.  The ribs were awesome and had a little bit of a kick to them.  The sides were just as good.  BBQ beans with some heat, Mac & Cheese with heat, and excellent mashed potatoes made this a Quest meal to remember, despite eating it in a hotel lobby.

Swimming
We could not go to a hotel with a pool and not allow the kids to go in.  That would be cruel, deserved but cruel.  So despite it being far past Jake’s bedtime, it was off to the pool.  Nate, Jake, and Haley had a 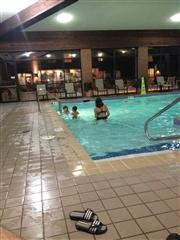 wonderful time swimming and annoying the few other people in the pool. In a strange twist of irony, although I am not quite sure why, this was the only trip thus far that Al did not bring a bathing suit. He was quite jealous of the kids. At some point, it was back to the room for some sleep before an early start the next day.

Albany
Sunday was an early wake up as we had some personal business in Albany.  After a brief breakfast pit stop at Dunkin’ Donuts, it was 2 hours to Albany.  It is sufficient to know that upon entering the mall in Albany, Beth became excited at seeing a sports memorabilia store.  Oh how far Beth has come!  Beth remarks, “Kind of sad, actually.”

Postscript
Clemson would go on to a 10-2 record with losses to Florida State (ultimately the National Champions) and South Carolina. This was good enough for second place in the ACC Atlantic Division. To me this was an excellent season. Tiger fans may disagree since they started the season being in the conversation for a national title, but I never bought in to that. To me, this was a great Tiger season because they lost to better teams and did not have the usual slip up to a team they should not have lost to. Clemson finished the season beating Ohio State in the Orange Bowl.

Syracuse ended the season 6-6 and beat Minnesota in the Texas Bowl.

Photo Gallery
For our Syracuse photo album, Please click here. You can view as a collage or run as a slideshow. There are comments to explain what is in the photo but most are self explanatory. Thanks to Google, I can no longer embed the slide show with comments.